- One of 10 most Influential South African’s of the Year, Independent Group of Newspapers.
- Person of the Year, Mail and Guardian Newspaper.
- Woman of the Year: Media and Communications, SABC.
● Recent invited speaker at a number of global conferences including National Press Club: Life and Legacy of Nelson Mandela; Human Rights Conference, Australia; and various Worlds AIDS Conferences as speaker and session chair.

PRAISE FROM A CBS 60 MINUTES PRODUCER - below the abridged resume 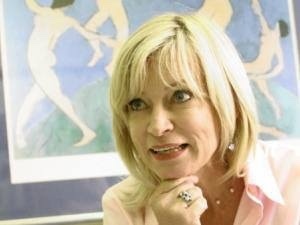 "Live your life in such a way that when you die, even the undertaker will be sorry," Mark Twain.

Charlene Smith is a multi-award winning journalist & author, book editor, lecturer, writing and English literature coach. Authorized biographer for Nelson Mandela she teaches writing globally over Zoom or in-person (when a pandemic is not raging).

She was profiled twice by Time magazine and every major news network in the world including CNN, CBS 60 Minutes, BBC, Le Monde, etc.

Clients include or have included Altron, the World Economic Forum, Fifa, Coca Cola, Ogilvy PR, and more.
An expert in HIV and AIDS, as well as gender violence, Charlene Smith was instrumental in getting the Centers for Disease Control to develop a protocol for Post-Exposure Prophylaxis after Sexual Assault released in 2004.
Charlene Smith is a sought after public speaker who has twice been the guest of the Swedish government; chaired sessions and delivered papers by invitation of the World AIDS Conference in South Africa, Thailand and Spain. She addresses conferences across the United States from Georgia to Iowa, Massachusetts to Washington, DC (including the National Press Club), and New York.
She has a Masters of Fine Arts Interdisciplinary Arts (Advanced Narrative Non-Fiction) and numerous advanced writing degrees or certifications. She lives in Massachusetts.

Published Books abridged:
● Mandela: In Celebration of a Great Life (Random House)
● Robben Island (Random House);
● Committed to Me (Random House)
● On the Sidelines Clapping: Gender in Southern Africa (Heinrich Boll Foundation)
● Proud of Me: Speaking Out Against Sexual Violence and HIV (Penguin), nominated for Alan Paton Award, South Africa’s most prestigious literary award. Voted one of the top 10 books in South Africa. Translated into Swedish by Leopard Forlag and titled, Utan Skuld.

Ghost writer of a number of books (I cannot contractually name them).

Randall Joyce generated some of the most feedback yet for our 10 Plus 1 feature.
So, what do you do for a living?

I'm a producer in the CBS News London Bureau. In television news, the producer is the person behind the scenes organizing coverage of the story.

Who is the most fascinating person you've covered and who is the biggest jerk?

On the positive side I would have to mention Charlene Smith, a South African woman who survived a brutal rape and then went on to launch a campaign against the epidemic of sexual violence in her homeland. She successfully avoided falling into self-pity in part because she always had so much empathy for others. The best way to make her angry was to refer to her as a rape victim.

On the negative side I would have to put Tuta, the war crimes suspect. He bookends with Charlene Smith as well because he and his colleagues made history by being indicted in a case based solely on rape as a war crime. He was a common criminal in jail before the war and was let out to terrorize the Muslim population of his town. Strangely his group justified its violence by defiantly clinging to victim status for the Serbs in a long line of Balkan atrocities. A tattoo on Tuta's forehead summed up his view of life. It read: "Before I was born I was dead."

Charlene Smith Remembers Winnie Mandela
With Linzi Bourhill, Cape Talk (audio), April 6, 2018
Tribute to Winnie Mandela (audio)
Shafiq Morton, Voice of the Cape, April 4, 2018
Charlene Smith on the Actual Life of Winnie Mandela
SAPeople, April 6, 2018
Charlene Smith on the Life of Winnie Mandela
Power-FM, April 4, 2018 - audio
What Happened to Brand Mandela
eNCA, May 22, 2013
Defending the Legacy of Winnie Mandela
Radio Interview with Tsepiso Makwetla, SAfm, April 4, 2018
Winnie Mandela The Young Mother Who Refused to be Broken
BBC News, April 4, 2018
Defending Ma Winnie's Legacy
Times Live, April 4, 2018
Winnie Madikizela Mandela Post Traumatic Stress Disorder was never treated
The Citizen, April 4, 2018
Why Winnie has Earned Empathy Not Judgment
The Sowetan, April 4, 2018
The Conscience of a Nation that has forgotten apartheid
On the death of Winnie Madikizela Mandela, April 4, 2018
Mourning the death of an old friend, Ronnie Mamoepa, spokesperson to South Africa's deputy president, Cyril Ramaphosa
Hamba Kahle Ronnie
Interview about teaching writing
This was written at a time when former South African president and AIDS denialist, Thabo Mbeki was denying anti-retroviral medication to South Africans. At the time one in three SAs were infected with HIV or AIDS. Seven babies a day were dying of the viru
Mbeki attacks those who criticize crime
Bara Gets to the Heart of the Matter
About Rashid and Rafiq Essop who, with their own funds, began the cardiology unit at Chris-Hani Bardgwanath hospital in Soweto, near Johannesburg. CHB is the largest hospital in Africa and the southern hemisphere.
Every 26 Seconds A Woman Gets Raped - Bob Simon, CBS 60 Minutes
Link to a CBS 60 Minutes interview with me. Anderson Cooper and Randall Joyce traveled to South Africa to interview me.
New edition of Mandela: In Celebration of a Great Life now out http://www.amazon.com/Mandela-In-Celebration-Great-Life/dp/1928213138/ref=dp_ob_title_bk
This updated edition includes a new chapter on the last year of Mandela's life, his death and funeral.
Don't Feed the Bears, Boston Globe by Charlene Smith
Nelson Mandela's legacy - is it respected in South Africa?
National Geographic by Charlene Smith
Cheaters those who cheat with exams, on their partners, or who scam their company have brains that operated differently
This article in Brainworld by Charlene Smith explains how and why
Interviewed by Huffington Post (video) following the death of Nelson Mandela
My interview is about 14 minutes in - unfortunately rather poor sound quality.
Interviewed on Fox News by Shepard Smith following the death of Nelson Mandela
MLK and Mandela: Two countries, one dream
Interview with Associated Press about Martin Luther King and Nelson Mandela, what they shared, and what they did not
Nelson Mandela loved Boston
Cambridge Chronicle, Cambridge, Massachusetts, July 10, 2013
Article in McLeans Magazine, Canada quoting me about Nelson Mandela and family feuding
Charlene Smith's essay "The Lost Cat and the Low Down on Cambridge Highlands" is in the Harvard Bookstore collection of New England essays published by Paige Press, 2012..
Review of Mandela: In Celebration of a Great Life
TimesLive
Memories about Nelson Mandela
Charlene Smith interviewed by Nancy Richards of SAfm
CNN with Carol Costello
Interview July 18, 2012 with Charlene Smith
SAfm 'Otherwise' with Nancy Richards
July 18, 2012, Nelson Mandela's 94th birthday - Nancy Richards interviews Charlene Smith.
Cambridge Chronicle Interview with Charlene Smith
Cambridge Chronicle Interview with Charlene Smith about Nelson Mandela
Me & Nelson Mandela
Los Angeles Times: White power & Mandela

Are you a Transformative Leader? Quiz
Chatting with Michele Martin on NPR's "Tell Me More"
Loading…}